The World is Watching - Near Head on Collision by Cop Car

Police indiscretion is visible and under reported. This is not disrespect; just disappointment. Most Chicagoans know that Chicago Police Officers demonstrate public disrespect for the traffic laws. When a safe option to ticket is there, police are known to overlook it, as well. Officers lose the credibility war, when they violate traffic laws, among other indiscretions. I was not the only one who witnessed the near 'head on collision' at Ridge and Chase this evening at 8:58 p.m. The officer would have been at fault, but is that how it would be reported?

I watched as a squad car parked in front of the alley sidesaddle to the sidewalk under construction on the north side of Chase. An officer stepped out of his squad car. He left the motor running. Someone was walking their small dog. Apparently, the officer was convinced that the dog walker wasn't going to commit grand theft auto this evening in a squad car. I'll leave some facts out. The officer walked north down the alley to a gated porch stairwell. He was greeted about thirty seconds later and let in.

Another forty five seconds passed before he trotted down the stairs and off to his squad car. Rather than properly head east down Chase, a one way street; or down the alley heading south to Rogers, the officer did a U turn against traffic and drove west bound on up one way Chase. At 8:58 p.m. this exemplary specimen of Chicago's Brainiest suddenly stopped within five feet of a 'head on collision' with a yellow colored taxi cab turning right onRidge and Chase. Your tax dollars at work.

If the 24th District officer is reading this, there were at least three witnesses. All of us were disappointed. A decision was made not to release the squad car number or the peace officer's description. However, we want you to know that we are watching. If we see you get into an accident, then OPS should know who caused it. Also, the lazy recklessness that goes into such a thoughtless act!

Be a good neighbor. State Farm is not always there. Follow the traffic laws like the rest of us! How can we encourage Police compliance without citations? Just a public warning?

I have seen Fire Truck travel at 50 mph or more up Rogers, among other indiscretions. We hear about Fire truck/car collisions too often these days. Those who serve to protect should not have to swerve, project, and perhaps, even eject!

I encourage those in Rogers Park who have the time, squad car number, and location to report CPD traffic violations as comments, among other concerns. Perhaps, online public embarrassment may make a difference. Perhaps Caluris might read this. Then, again, we didn't bother to identify the officer, so maybe he will ignore it.
Posted by lafew at 10/26/2008 10:25:00 PM No comments: 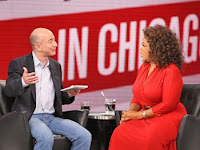 Rogers Park, When No One is Watching

I was given a privilege to participate as a soccer dad in Rogers Park AYSO. For those without the experience, who pretend that Rogers Park lacks good neighbors, you may want to rethink that assumption. As I read this Obama piece with amusement, I thought of all the 'sung' but subtle AYSO volunteers in our community who use the resources and volunteer to improve our community. A few are known entities; I don't know that Joe Moore had children in AYSO; perhaps so, but Nathan was not on my watch.

It is certainly amusing for Obama to descend upon a Lake Front Soccer field, but there are many public figures who go on doing their jobs and still find time to serve their community. Yes, the baseball cap does bring Obama down to earth, since he is a contemporary, many of us contemporaries who do justice to our community also find time to work as volunteers.

For those in that position with kids, don't just attend the games, ensure that the games continue to happen for all who have yet to participate. Rogers Park AYSO needs referees, among others. AYSO Rogers Park is as significant as you want it to be. Being a soccer mom does not have to be cliche. Watching a child interact with other kids to reach any goal is quite an experience, even when they don't score. Take time out to participate in life. Don't be a statistic.
Posted by lafew at 10/20/2008 09:27:00 PM No comments:

Reply to Dennis Rodkin; In a Nutshell, Appreciated.

For those who follow this rather slow blog, Dennis Rodkin just replied. His thoughtful post is the last comment in the previous piece. Mr. Rodkin, I appreciate the response and don't mean to sound formal. Sometimes, I feel a rasp in the writing, but revisions remain focused on the speculation and skepticism. I am no stranger to the provocative, which draws attention. I read Ted Allen's article on Chaz, but did not recall the author. It was well written, but I found the Chaz billboards beyond tacky. Whatever happened to the Chaz?
Alleged Visit
Apparently, my recollection of who I actually met and where must have failed to pierce through the haze of my aging and slightly disoriented memory. Perhaps, not you? The reason for the conceivable visit may have been my past involvement with the Illinois Orchid Society's Annual Show at the Botanic Garden. I am curious if this rings a bell. If not, then I must be mistaken and stand corrected.
That Annual Spring IOS show is huge and quite a spectacle. The Fall Show is small by comparison. Nevertheless, the IOS seems regularly overlooked by Chicago Magazine. This, even though the Society, among others have existed in the area since the early fifties. I think that the Show made the Robb Report. Maybe Chicago Magazine eventually included a piece on it. I recall leaving a PSA and some purple and white promotional materials with some Chicago Magazine writer. Who I actually visited and where must have eluded me.
That Orchid Organization returned to Botanic Gardens from a brief stint at Oakton Community College. Did a zealous IOS PR Person have any contact with you in the distant? I may have stopped off in Rogers Park. Like you said, it may have been someone else from the publication who ignored the effort.
The Love/Hate Relationship with Chicago Magazine from a Native Chicagoan's Vantage Point.
I am now on my 10th to 20th year on and off with the Chicago Magazine subscription. I think that everyone 'without deal estate size funds' has a love/hate relationship with the opulent ouzo of Chicago Mags articles. The Dreihaus Fourth of July Parties and Blue Blood articles fascinate some of us, but eventually begin to reek of anise when in overdrive. Maybe we fall in the arguable, but private 'nouveau pobre' ambiance. The phrase "nouveau pobre" was coined by someone other than me. Perhaps, it does not apply.
I haven't thrived on publicity, nor did family. I recall the Zahn kidnapping and his eventual escape. I wonder how many remember that story? Was there ever any follow up, because that story seemed like it was lost to history? Zahn was quite a publicity hound from what I was told until after the kidnapping and his escape.
This is about the fourth or fifth generation in Chicago with some in the family tree remaining on either coast and a few who left for other continents. I expect to remain and look forward to RP improvements.
Now RP Development in Spite of the Dogs of Gore
On Rogers Park developments, where can anyone begin. The Howard Terminal and the new apartments on Howard seem like quite a change. The RP Parent Club that you can locate at http://www.rogerspark.com/ may reveal a transformation of sorts. A few of us are staying put and taking the CPS System seriously.
The old condo developments like Casa Bonita on Ridge Blvd near St. Scholastica and the Castle Condos by Indian Boundary Park have yet to be revealed in their full splendor. The HGTV show on the Oakley Property just north of Touhy ignored some of the new condos emerging down Touhy.
However, I am always fascinated by the Prairie Style Arts and Craft Stucco single family homes on and off Ridge. I regret the loss of the home on the Corner of Ridge and Rogers kitty corner from the Lamp Post. Nevertheless, the auction for the condo by Ridge and Chase should get some attention.
One thing that you might have meant to bring attention to is that Ted Allen once lived in Rogers Park, as well. Of course, I understood that he moved out, when Queer Eye went platinum for New Yorkers. I regret no Queer Eye visits to RP. I enjoy his current show, but we can always hope that he encourages attention for Rogers Park, as well.
I am glad to hear that you make efforts to keep your independence. Many readers might fear otherwise. It is obvious that the value of real estate dictates demand, even if a good location is in the eyes of the beholder. I thrive on the diversity of a non-Wonderbread world. Some don't. I harbor no grudges, just curiousity. Thanks for the insight.
The Next RP Piece is One that Some Should have Done Years Ago! Perhaps, it was, but forgotten. Check back on Thursday.
Posted by lafew at 10/19/2008 09:02:00 PM 2 comments: