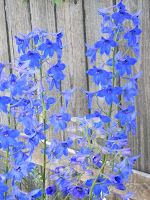 The Rogers Park Garden Group will have its Annual Garden Meander on Tuesday, July 27, 2010 from 6p.m. to 8:30 p.m. The walk starts at Touhy and Ridge to be followed by a catered reception and lecture at St. Scholastica High School near Fargo and Ridge.

Although this walk is for members only, membership is only $10 and can be paid through the website. Usually, membership can be paid at the events. However, I'd suggest you check with the Rogers Park Garden Group volunteers and its website. The Rogers Park Garden Meander is a nice way to spend a weekday summer evening. It can help you to know members, who are also neighbors that can provide good garden tips.

The Group may benefit from having the Meander on a weekend. However, I understand that the Meander is still well attended even though it is during the week.
Posted by lafew at 7/18/2010 09:27:00 PM No comments:

Rogers Avenue: Advantage or Disadvantage? Who controls the pursestrings?

I have walked nights on Rogers and live nearby. Pottawattomi Park is filled with children and the Off duty police officer helps, when the Park District pays for it. The Park District claims it will bring back the Officer after an approximately three month hiatus.

The commercial strip by Damen looks seedier than it is. Residents have to act like they belong.

People know me; they see me, and this makes a difference. Residents are welcome; riff raff isn't. You just have to be a little more tolerant at times. The challenge is often with those who don't live here, not with those who do, with minimal exceptions. We have a commercial landlord at Damen and Rogers who occasionally repairs, but refuses to reasonably maintain the commercial strip. This is what spurs neighborhood embarrassment. This is not a sellers market! However, this does not mean that the owners should sit on an eyesore! Michael Land, his predecessors, and the Alderman are aware of Damen and Rogers. It is debatable about what can or should be done about the situation.

Apparently, the owner has pie in the sky ideas about the value of the property, so it does not sell. It's a teardown! Perhaps there are ties to businesses and "The Ho" that lives in the area. I am sure that there is some neighborhood loyalty to "The Ho" and rightfully so. However, if The Ho won't go, then the building should be reasonably rehabilitated, not randomly redecorated. At least it is no longer pepto bismol pink!

Maybe the commercial strip owner wants to maintain the place as a potential movie set. Perhaps, Sanford and Son, The Movie? Or perhaps, "The Blues Brothers Part II: Urban Blight Ain't Right!" I just don't know! They should should shape up, or sell out!

As for Glencoe, been there, done that.

On convenience and diversity, I can walk to the corner bar, coffee shop, red line, Fish Keg, Jamaican food joint, Romanian Kosher deli, etc. Why would I want to head north just to live on an acre of grass? The suburbs are full of pale faces, who try to keep it that way. The north shore population of approximately 5% Asian, 2% African American, 3% Hispanic just does not cut it for us. I know my neighbors. We all have our 1% that need an attitude adjustment.

Of course, the RP Pace Bus picks up a from stop that is 100 foot walk. And the beaches? We have them! If I want to go to your Fourth of July parade, I just drive 20 minutes or take the Metra north.