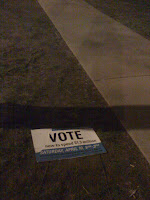 Did you vote today? Did you feel like those who volunteered even cared who voted? It appeared like every mother's son from the suburbs and than some could have voted. Of course, "the vote" was a good faith gesture, or was it? I was never asked for identification.
The cost of those signs, some of which were stuck to an SUV with a Tinley Park High School Sticker made me wonder. Was this simply another ruse to lift Joe's political image to 49th Ward voters?
Again, I soured on the decision by so called election judges not to bother asking me for identification. Anyone could have easily brought in an entourage. I did not see Joe anywhere. Say it ain't so, Joe?
Posted by lafew at 4/10/2010 07:05:00 PM 2 comments: