I have always wondered what makes Dennis Rodkin tick? Ever since I first met him on his Ravenswood stoop back in the early nineties (eighties?), I've wondered! I mean, what a cushy job! Is he wined and dined by the other neighborhood realtors? Woo'd and Coo'ed by socialites in need of a little satisfaction on the deal estate exchange? Spoiled and oiled by mortgage brokers looking to suck in another $20Gs on the next 'cook the books' closing? Whose to blame for the mortgage mess?

Meanwhile, he gets to dice, slice, and dictate to us. The statistics are with questionable rationale. Pure numbers without any ability to determine what is going on in one neighborhood or another. What do the statistics on home buying really mean? I admit that reporters must remain objective. Perhaps, some of this speculation should be turned upside down. Now, I get to do it to some extent. Where to buy now? Buy where you want to dwell. Don't get fooled, again.


The Rogers Park statistics really mean less than they seem. In all, a measly 17 homes were sold from 7/1/07 to 6/30/08. What does that tell us? Rodkin surmises that it means that the value of our homes plummetted by -13.45%. I disagree. Few want to sell their home unless they are in foreclosure, perhaps. Most of us know that there is not much stock in single family homes in Rogers Park. That is a legitimate factor.

Presuming so, who wants to sell their home below market, when the neighbors know RP life is worth more? The average sale price of those 17 homes is $419,818. Were these distressed property sales? Perhaps, the housing stock stinks? Who wants to buy a home unless it fits expectations? Some may want to buy to fix it up. Others, to live closer to their jobs, the sights, the Lakefront, Loyola, NU, and public transportation.

The natives know that the new Howard Street Terminal is like a lit Menorah at Night. It is a major modern transportation hub. The Terminal is within walking distance of Ridge Boulevard for the more religious on Friday. This, combined with the Evanston Condos to the north will bring further revival to Howard Street. At night, there is always a taxi waiting to bring me home when I'm lazy and arrive after midnight. It is not a matter of if, just a matter of when! 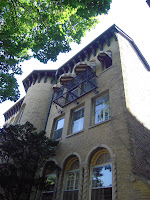 Rogers Park homes have gone up at least 159.81% since 1994. We are not selling any time soon unless distressed. The average Rogers Park Condo sells for $221,452. One example; we visited the Casa Bonita's Spanish Revival Pool with the sliding glass doors, among other significant amenities. There is style and value. The photo is from a property on Hoyne north of Jarvis.

The attractiveness and size of the average RP Condo is a significant improvement over what many see elsewhere. The buildings are much more vintage. More buildings were gutted, renovated and subdivided. We have also seen teardowns and build ups on Touhy, but in so doing the replacements have really brightened up our neighborhood.

Chicago has many neighborhoods. This means that some neighborhoods will remain unknown gems ripe with value. There will be those who think that they can improve the quality of life with pessimism. They may discourage others. They will put fear into the ignorant and rookies. They will make Lakeview and West Ridge Boosters gleem with pride. I am not one of them. It is okay to bring reality to light. However, using a sledgehammer encourages outsiders to poke fun at the natives. I can live with a little humility.

Being the one who walks home late and varies the routine, I find that the walk is worth the exercise. How do you integrate with your neighborhood? Yes, there is security in numbers, but some of us feel secure and others don't. I am sure that they are reasonable. I can read fear a mile away. I think that if you fear fear, then you bring on stupidity. I realize that some areas are in need of better lighting, but some have it. Some of us should pick up the litter and push landlords to retain reliable maintenance contractors.

I realize that there will be apartments. We will have to questionable the ignorance of management from the Long Kogen folks, among others. There is a telephone number at 7239 N. Ridge. Iif you don't like the shrubbery or what is left of the grass (more glass), then contact Sandy and let her know. Her telephone number is strapped to the bricks just aching for attention.


The Challenge of Density v. Ignorance
Rogers Park has density, and with it, the challenges of city living. We are not looking to change the price as much as the quality of life. We need to work with those who have access to the brains of others when they are young. Why more neglect to volunteer or work just a little with the local school councils at Armstrong, Gale, Jordan, etc. confuses me. Perhaps, the kids can start influencing their parents.
Imagine if a kid rebelling against his mother by telling her to 'stash the trash,' only to get hit with a shoe? Imagine what you can do to influence those who need it the most. When kids have kids, then they 'may' develop generations of ignorance. That means that intelligence is often held by great grandma, not the other two generations that proceed her.
I hope that some of us wake up instead of living life through CSI. I am on maggot overload. Perhaps, some of us might learn something from those whom we least expect to learn. Maybe taking a walk is healthier and safer than couching your potatoes? Maybe getting noticed may get your neighborhood noticed? Perhaps a few more merchants and writers will smell the Starbucks and wake up. However, than again, maybe our neighborhood is better off a Duncan Donut Kingdom?
Posted by lafew at 9/21/2008 08:38:00 PM 8 comments:

Litterpigs, Isn't There a Law? What about Enforcement? 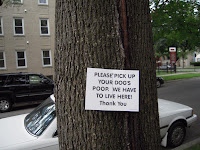 What is the City Ordinance that requires dog owners to clean up after their dog? What is the City Ordinance or State Statute that penalizes pedestrians and derides drivers who throw trash on the ground?
Are homeowners and building management supposed to show some pride and clean up after their property is trashed? It is ashame that Chicago does not deputize or encourage Streets and Sanitation. Someone should cite those with perpetual litter on their property or fine pedestrians who are careless and could care less! Imagine if the litterpigs themselves had to do community service cleaning up Ridge Boulevard! Justice delayed is justice denied?
I recently saw what seemed to me like an obese drunk African American drinking a can of Sprite Zero. This is by no means limited to African American. I admit to seeing a drunk white patron and his less inebriated friend zigging out of the Lamp Post. The blond tried to get the neighborhoods attention last spring. Nevertheless, the Icehouse and Old English bottles 'tend' to be carried and dropped by those with darker complexions. However, I know that most of us of any complexion keep our empties inside. The challenge for us is how to live with the consequences of those who don't.
I was with the mutt, stuck walking until the doo hit the grass. That can take a while. I used the "H" word as in "Hi," G-d forbid. All that this guy could do is look up with tensed raging facial muscles, glazed glassy eyes and expend a subtle grunt. He may have been younger, but alcohol can age the dependent. As a momento, he intentionally placed his empty Sprite can on the small metal box attached to the traffic light. He was in a piss poor mood, perhaps, a piss plentiful mood.
Inside the white bag suspended from the fingers of his left hand looked like a standard issue vodka bottle. Perhaps, it was purchased from the grocer/liquor store south of Touhy and Ridge. The man's sacrifice to the traffic pole god now placed, he traveled north past Jarvis and Ridge. I was curious whether he would collapse en route, so I walked the dog north. I chose to lose track of him; perhaps as he headed for Birchwood or Evanston for that matter.
Unfortunately, Chicago police and paramedics seem to care less about those in need of alcohol or drug treatment. This does not overcome current neighborhood concerns, when Police look the other way to open expressions of drug and alcohol addiction. Maybe the arguable alcoholism and binge drinking exposed on ABC's 20/20 by Stoessel is the reason for what seems like reckless restraint. 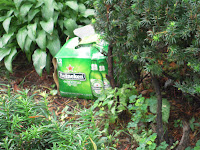 Nevertheless, the above sign near the northeast corner of Chase and Ridge was removed in spite of the litter challenge. Perhaps, there are a few similar signs still posted on Chase west of Ridge. I was told by my significant other that it is inappropriate to post these signs. Yet, in an effort to encourage sign posters, I have come up with more amusing ideas for signage. I encourage those with the gall!
PROPOSED SIGNAGE
"Plant pride, not Kentucky Fried. Dogs that eat bones choke!"
"Display Respect: Stash the Trash."
"Dog doo on shoes makes for a poor first impression. Respect those who walk in your dog's tracks."
"Enjoy the view. Don't destroy it. Carry on!"
"She who throws garbage has no respect for those stuck displaying it."
"Neighbors appreciate restraint: The dumpster is just around the corner."
"We don't collect aluminum and glass, so stash your trash!"
Posted by lafew at 9/15/2008 09:12:00 AM No comments: 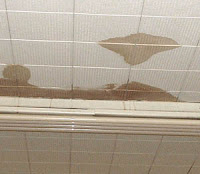 Well, when it rained, it poured and so did the known and unknown pore in the ceiling. The pots, pains and plastic recycling bags came out. The roofer gave up and told us to hire a carpenter. In spite of last weeks carpentry bill from the previous downpour, we are back to the beginning.
We are on three voicemail messages to the carpenter, two completed calls, two disconnects from poor reception, no date to repair, and counting.
I think that Sting should have written a song entitled, "how to seal an imploding roof." It seems more evasive and inevitable, then defusing a nuclear bomb.
Posted by lafew at 9/14/2008 06:12:00 PM No comments: