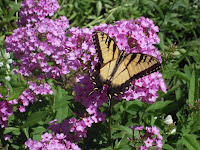 For those who remember my false alarm, this Sunday is the day for the RP Garden Group Sale. The place is in front of Charmers and the entire Sidewalk block down Jarvis. There should be more than a few bargains.
We hope that the weather holds up. For those who don't know, some insist that plants grow better if you plant them when its raining/wet out. Now, I appreciate that there are not as many souls who will brave the wet climates for the sake of their plants. However, this is the weekend for the sale.
The RPGG does quite a bit of sprucing up, which includes the Rogers Park Station. There will be more to come if we can contribute and support to this worthy organization. Of course, if you can't come, go to the meetings and check out this Spring/Summer's Garden Meander. Here is a link to some of the photos from the last 2009 Garden Meander and 2008 Garden Sale.
Posted by lafew at 9/21/2009 10:22:00 PM No comments:

The Skewed Crime Blotter for the Northshore

The actual crime statistics are not reported for the suburbs. For four months, the Chicago Tribune's blue metal box remained damaged at Chase and Ridge. The Headline exposed a 2009 triple murder in Wilmette. This was on March 3, 2009. The suburbanite who had already committed a double murder, now took his own life and that of his wife and kid. Several months later, the Tribune/Redeye seems to deny that these homicides took place. What else have our Chicago Newspapers forgotten to tell us about actual suburban crime rate based upon the census? Must the City folk not hear about North Shore homicides? It certainly reports Chicago statistics to the suburbanites!

Out of respect, we contacted Mr. Swartz. This was the response:

"Thanks for the e-mail. Unfortunately, I just track and write about homicides within Chicago city limits. The Tribune and its suburban editions write about crimes in the 'burbs."

I appreciate the comment, but if you look at the map, Mr. S., the article includes homicides reported in Evanston, Lincolnwood, and Park Ridge. The article just cuts off the inquiry! Objective journalism? Dubious reporting? Does the Redeye attempt to puts its toe in the proverbial suburban homicide pool, get wet, and pretend the statistics don't really matter?

As the Morse Hell hole occasionally belches crime, the burbs bury it with bravado! We don't hear about the large scale drug busts. Sometimes, we hear about the Rezko's. Is the goal to keep suburban real estate values up? Do racial and economic barriers keep crime out? Does the decision to create schools with 99% white students benefit society (e.g. Braeside School, under 1% Black
Posted by lafew at 9/21/2009 09:18:00 PM No comments: