Do the Dog! Don't Get Stalked Like Celery: Five Easy McGruff Rules with Commentary

I feel like a combination of George Clinton with an Atomic Dog McGruff coming on stage with him. Its the tempo, not the lyrics or basis for the tune. My hope is that Loyola University Students take reasonable precautions and consider what follows from a long time resident. This neighborhood is as safe as you make it. You need not break and fixate, like some, on those who may look to the CPD at the Twenty-Fourth District as the elixir to stop all crime. There are ways to blend in and avoid crime. Make friends and keep them around, among other things suggested, below.

There are the shortsighted or temporarily naive, who are tricked every day. Students are not the only victims. Hindsight is 20/20. You must approach people who you think you don't know, like you don't know them. True friends will forgive, but criminals and thieves don't care. Often, if you stop or open your mouth, then a crime may begin. All it takes is the wrong type of inconsistent eye contact with a perpetrator. Some people just look more willing to help anyone in need. Those with money who feel that they are on a mission can fall prey. The Guardian Angels are always in need of a few volunteers, like Miguel Fuentes, willing to train with them. Okay, its seems a bit radical to some, but CAPs needs a bit of a boost at times.
Rule one: At night, if uncomfortable, consider traveling in a group, close to groups, in lighted areas, or near others with the tactics, below. If you are uncomfortable, call a friend for a ride, Loyola University Security gives rides, take the bus, or a taxi. If you give a friend a ride, wait until they get in the door and close it.
Reason: Criminals don't want to be seen; someone will more likely get killed, witness the attack, catch the offender, or even more easily identify the criminal.
Rule two: If you choose to 'ever walk alone,' don't stop for anyone who you do not know and does not know your name. Don't let a friend walk home, alone at night, if possible, particularly if he or she was drinking [slight clarification].
Rule three: When alone, you are a target, when you are moving you are a more difficult bullseye. Keep walking or even ride your bicycle, where you cannot take transportation. If a thief cannot tell you what they want, you are not going to get robbed.

Rule four: If you must be alone, then look and act as if you have lived there all of your life (e.g. act as if you are 'packing a piece,' friends or police are nearby, etc.). Putting on earbuds can be both a blessing and a curse. An iPod can simultaneously comfort and impair at night.
Your state of mind has a significant affect on repeat offenders. If you keep looking back and forth scoping the neighborhood, then you demonstrate insecurity and may even encourage someone 'to fake it to make it.' (Thank George, for the thought provoking photos). Direct eye contact is good when someone is walking directly towards you on the sidewalk, but use some common sense as you sense your surroundings.
Brief Comments on Common Sense: It is good to be open minded and objective, but do so in the proper forum. If you feel charitable, then help out at a soup kitchen, among other places. Don't let down your guard; if you

feel like you need a Zen moment, ignore those around who you do not need to recognize. They may not recognize you, either. Don't be a busy body, who needs to know everyone's business in order to help the world.
Ultimately, I don't know what to say about random acts of ignorance, whether they be a criminals or one who opens up to a perpetrator. It is easy to lose a cell phone to a thief.
Rule Five: A person can have thirteen dollars in their pocket billfold as 'an anchor' for that rare moment, when you have to 'heave and go.' Keep a billfold with a ten and few ones to discard in an emergency. The non-shiny metal billfold makes noise when it hits the pavement and attracts a thiefs attention. A petty thief wants quick money. However, in fifteen years, I have never had to throw mine, because the other rules have worked.
Segway Dos: A scam artist/petty thief may start with conversation. The criminal may try to pretend that he knows you, is your building's security guard, janitor, has some bazaar badluck story or action to get your attention. Then, when you let him or her borrow your iPhone, the dude runs off with it.
Perhaps, you open your wallet to give a dollar but the thief wants more, so he pulls out 'a piece,' knocks you down, or simply grabs your wallet. Again, if you are unlucky enough to find a few messed up kids on a power trip, who struck out at getting beer or need to get a rise, then do what you can to stare them down with direct eye contact and if you need to draw attention from others, then do it.
Try to act as if you do not notice unless impossible. You snooze, you lose. Again, only in those rare situation will you have to dump your anchor with a Hamilton, three Washingtons, and run. If you know your surroundings, or particularly if you don't, use discretion and take a cab if no one is around. 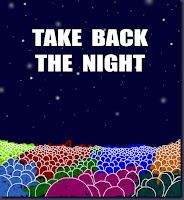 If more of us are out and about in the neighborhood, then the more forceful or violent criminals are intimidated. They did not call it, "Take Back the Night" for nothing. If we avoid making ourselves targets, then there will be less crime. More witnesses brings less crime. If you travel in a pack, you chase away the strangers looking for 'an easy mark.' If you follow these tips and act on your options, then you give Rogers Park T.A.P.O.A.F.O.M. [or for those who forgot, The Awesome Power Of A Fully Operational Mothership]. By the way, did anyone see George Clinton take Country Club Hills on June 23, 2007?
Posted by lafew at 12/10/2007 10:29:00 PM No comments: 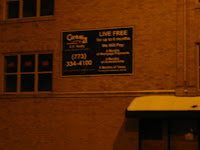 I live within a hundred feet of this recently gutted building about to convert to condos. I appreciate the neighborhood favorites, which include 'The Alley Guy,' among others. When I saw the above for sale sign go up at 7213 N. Rogers, I had to say something. First, it is an incredible offer until December 31, 2007. Second, this neighborhood is changing for the better. Get it while its cheap. Most of us who have lived here for the last ten years know it. Seniors are outside, Volvos are parked in driveways, and that is a good sign to us. Our property values have doubled, but we aren't selling. We have even resolved to educate the kids in CPS magnet and selective enrollment to the extent possible.
There may be a few digressions. The corner of Ridge, Rogers, and Touhy is worthy of a left turn only arrow from both east and west. However, for the first time, a restaurant has survived its third year anniversary. That Mexican entry on Touhy is worth a stop if you don't want to cook and order before nine or ten depending upon the evening. The Lamp Post is a sports bar fixture. Its tailgate party is complete with grill on the side of the building, which creates some sense of neighborhood for a mainstay traditional sports bar.
Although a few houses have been removed and replaced by upscale condos and townhomes, the blocks are integrated with an assortment of housing. At least six houses were featured in an RP Historical Society or Garden Walk on either Touhy or Ridge. Every place has its ten percent, but the regulars are as good as it gets for Chicago. This condo is within walking distance of St. Margaret Mary's and St. Scholastica. More than one neighbor has an Annual Glogg Party every January.
Without naming names, because the locals know, this is Chicago. Whether it is the Irish or the Japanese guy who regularly parks themself in the summer lawn chair to greet neighbors on the sidewalk or the guy who gardens, there is enough to justify the location. We are seeing a few twenty something dog walkers and joggers down Rogers in the summer. We have neighbors who you can trust to water your plants and watch your animals while you vacation. 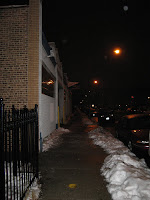 This evening, I got so tired of the comments about our neighborhood, that I walked past the townhomes to Damen and Rogers at 11:30 p.m. Yes, me and my whitebread self. I started to take night photos of the former site of the Pulse Garage, which is for sale by Kritt away from the videocameras. Like its former neighbor, the Chinese Buffet, it will likely be demolished to become townhomes or condos. While en route, a neighbor in a garden level condo saw me taking photos to the left. She had to be wondering what the hell I was doing. Perhaps, my concerns were spurned by The Broken Hearted comments about the Ho a few weeks ago. I am skeptical, but it was an extreme aberration to me.

If I did not want to take the blood thinner, I would have hit the Ho at 11:38 p.m. this evening, but did not bother to walk in or see if it was open. Frankly, I never drink alone. Perhaps, CG is too lame to go over there, but I'm not because I live here. I think that it needs the business to stay in business. Recently, the Laundramat got a new coat of sky blue paint. Perhaps, the owner is getting serious about taking care of the property. I am just not experiencing the same wrath and an isolated incident or two is not going to change me or my habits.
I know that there are ignorant people. You have to treat people with respect, anywhere. However, if someone disrespects you, you need to give them space and let them think about it on their own time, not yours. Whether they are folks who criticize African Americans, Hispanics, other groups, don't know how to treat their kids, want a dollar, or talk abnormal in public, most of us don't comment or necessarily pull out that look of righteous indignation. 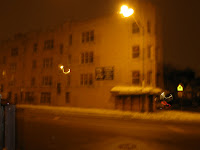 The rarely disrespectful visitors that I pass or pass by on the sidewalks or streets are gone in seconds, not minutes. That is when things return to significant calm, when compared to Ridge Avenue in Evanston. This proximate place that we call West Rogers Park makes life bearable. For those who live in the suburbs, I pity your commute. We live smack dab in the middle of the life of the city and suburbs. We can move from north to south by plane train, bus, or automobile. We can reach just about any restaurant, grocery store, or shop in a half an hour. We can walk to the golf course or bike to the south loop. 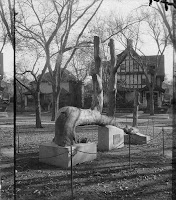 Where can you go from here?
Ridge, Rogers and Touhy are true crossroads! The Potawatomis' probably had a trail tree around here at one point pointing to the big city to come.
Posted by lafew at 12/09/2007 11:32:00 PM No comments: