Starved Rock, The Eagles Tour, and an Eagle Tree Gets the Chain Saw. 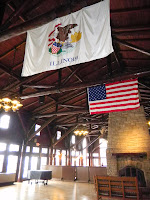 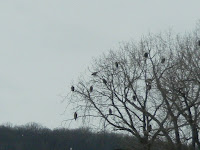 in one location. A few had enough energy left to soar above and around the locks in spite of the cold temperatures. However, trying to photograph eagles from about a mile is challenging with a compact camera, even if it has a zoom lens. I understand that the eagles may migrate north any day with little notice. Yet, they can stay as long as the fifteenth of March.
This was followed by our tour guide waxing about liability from lawsuits. Apparently, a homeowner feared the wrath of 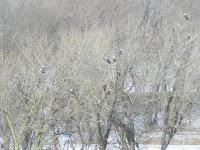 raptor madness on his lawn or corn field. You would think that an opportunity to charge a fee for such eco-tourism might thrill some locals. Unfortunately, it seems that one Utican thinks that Corboy and Dimetrio of Bob Clifford have investigators perched in the cliffs ready to document and sue every landowner on Illinois River with an eagle's nest and a kitchy billboard.
As a result, this led to the destruction of an eagle habitat. A tree that was being used by eagles for nesting on 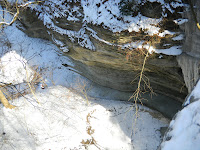 private property was cut down. Perhaps, like a good neighbor, the Audobon Society, Nature Conservancy, and State Farm can intervene and explain the facts of life.
It seems that such things as assumption of risk and the legal challenges to slip and fall lawsuits are unknown in these parts. Also, the fact that State Farm, among other insurance companies, own their own law firm to challenge questionable and valid claims. Maybe, an insurance companies can consider a discount and get some good PR!
Well, it was a good trip. We got out of the house and into Starved Rock State Park. It could have been a trip taken for the cost of gas and toll. However, we learned that the I&M Canal Center's Eagle presentation, with movie, is given exclusively to those who book the Starved Rock Lodge Eagle Trolley Tour. The Lodge is worth supporting and the $25 per person fee was not much to ask for. We didn't even have to stay the night!
Posted by lafew at 2/15/2010 07:16:00 PM No comments:

On Starved Rock, Plans and Polaroids. 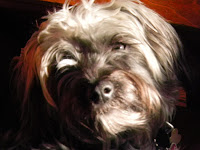 Eat! Not that! Your fangs aren't made for corn chips!
You bitch, stop dominating the cat, he does not work that way.
Hey! What are you doing! get down!
The Doritos are picked up to prevent that gagging sound after an adventurous mutt has gourmet tendencies. The cat, once it breaks its canine chains, rebells, only to be lowered from the kitchen counter. The long awaited dog walk looms with too little gas in the tank to make it worthwhile.
Now, while simultaneously planning for the day trip, the rush to Costco to fill the tires before six! The four day Lincoln/Washington Holiday is almost over with Valentines Day nestled in for good looks, but no seclusion or much selection for that matter. It looks like OpenTable.com will be my salvation, perhaps Dengeos. Will she remember that kids are not supposed to go to Valentines Day dinners?

Our plans to take off for a day, maybe a night, as well, could not be more tentative, even if reserved. This will be the second time that we have planned to see the eagles soar at Starved Rock State Park this winter. The first attempt was clogged with emotional congestion, sleep deprivation, and a decision to abandon plans. We are starved just to get out of the house in the antique minivan.
The kids are getting older. We aren't getting younger. I continue to persist on those yet to be taken voyages as the kids reach rebellion. I reach for the pomegranate juice, goji juice, and occasional dram of 'the water of life.' A few of the many efforts to find the fountain of youth complete with Lipitor. Well, at least my blood sugar is a pleasant 108! The heart rate also seems well. This is in spite of limited of exercise and a contemptuous diet. The occasional deviation to China Buffet, The Fish Keg, Gullivers, Hophaus, or Sabrin A Sub will not impress a cardiologist. The svelte physique, once worn, is in need of a comeback.
The walk up and down the heights, corners and crevices of Starved Rock may help a bit. The brisk breeze will hit our faces, our hands will be mitted, and we will scour the treetops in search of Haliaeetus leucocphalus.
My significant other has wanted to see the Starved Rock eagles grace the branches and cliffs of Utica, Illinois for a while. Unfortunately, work limits play. Our weekends may once, again, return and we may be a family. As a result, the eagles have never landed onto our schedule until now.
I have this sense of guilt every time I take the kids to some wonderland while the other half is tending to the ill. When we express what we have done, there is a subtle sense of envy eminating. This can put a chill on the moment. It had kept the kids in check for a while.
I'm unsure whether there will be a good photo op. However, I am bringing the Nikon Coolpix S70, anyway. This is the third or forth generation of digital cameras in a long line of broken crystals and malfunctioning lenses. Hopefully, we will land a few photos of the brown and white feathered raptors that will calmly caress our vision on Monday.
So does anyone else have any interesting plans over the weekend, other than those high points that Valentines Day may or may not create? Does Rogers Park have a family or two, who spent the weekend in tow? Are the empty nesters just going to nest in front of Apolo Ohno and wonder, "what happened to my kid?"
Posted by lafew at 2/14/2010 02:30:00 PM No comments:

I am a non-partisan, but as an independent observer, Giannoulias has a challenge for many reasons. First, he is a newcomer on the political scene. He just became Illinois Treasurer and is six years younger. He has significantly less experience and credibility than his challenger. Of course, he has the hard to pronounce Greek name, as well. I can just feel the Opaa, which can scare off voters, even if I enjoy Greece and Greek Culture!
What clinches it for Mark Kirk is that he is viewed by most as a moderate, even if some try to challenge. It will take brains, not brawn, to beat him. Frankly, the current Democratic Strategists seem incapable, incompetent, and presumptuous!
Would I like Giannoulias to win? Likely. Yet, he needs to review how to present his platform on the issues. I just don't think that his current team can do it! In an election bound to bring out the worst in some Democrats, Mark Kirk will get the nod. Voters won't necessarily come from City limits, but will come from everywhere else. The City does not 'currently' have the drive to get out the vote for Gianoulias. The lawn signs and leaflets taped to doors 'turn off' voters!
There is not currently enough interest in this election. The voters are not voting in droves. The 'populist Jewish name' garnered more interest than the most recommended Judges. Even the recommended arguable Jewish surnames like Bender and Greenspan were overlooked by actual voters! Mary Trew, a qualified candidate, nearly lost her election to the least competent candidate, Bernstein. Subcircuit 9A became a circus of political irresponsibility. Yet, Bernstein got his name out!
Bernstein, who is an Evanston Councilman with supposedly little or no recent experience in Court, per ALL lawyers organizations, beat the experienced. Bernstein nearly took the election. He could have been a member of the Socialist White People's Party. It was a near Democratic disgrace. Bernstein should have never run, IMHO, but he had the right to run! It was his choice and his supporters went all out! Perhaps, Bernstein should have run against Gianoulias! This election is one more reason why merit selection of judges should be reconsidered!
That said, the Dems have to look at realistic options. Danny Davis, among others, could have run for U.S. Senate! What are these Dems thinking? Why put out the ethnic name of the son of a dubious banker, whose bank is allegedly in hot water? Yes, Hoffman came out as the reformer. Unfortunately, he appeared to have little experience and limited name recognition. His stint trying to clean up Chicago politics was an obscure fact to most voters. He was a political lesser known 'Jim Thompson' looking to be a somebody. He ran against a politician with limited experience, some name recognition, and the political machine firmly behind his opponent.

Gianoulias and Scott Lee Hooker err Cohen remain mistakes, but not disasters, even if they lose. Now, its time to regroup or concede, but carefully build support Seals, because Dold is on the war path! If Dold appears like a moderate, then Seals' loses! The Democrats must find a way to be civil, not pushy. You can't send pushy Fuller Brush Salesmen door to door on the Northshore and expect to sell voters. It backfires like 'greasy kids stuff' at a '1970s Happening!'
There are more effective ways to reach Northshore Voters without upsetting them. Dold has firm backing from moderate groups that can make a difference. If the Democrats, including the DFA don't get the message, then the Northshore will dump Seals like bruised goods. Yet, few want to see someone like Seal with such drive simply crash, burn, and get slaughtered. This comes from someone who has lived on the Northshore for their entire life.
Yes, Seal has a chance. Learn how to circle the wagons, not pitch a match on the kerosene that lights another backfire.
Posted by lafew at 2/05/2010 07:06:00 AM No comments:

2010 Primary - One of the Few No One For Office Moments

As expressed, I was nauseated by this primary election. I expect this November to bring more of the same. Lawn signs on locations creating blight for month until someone gets sick of the Bernsteins, Gianoulias', Lubys', Nubys', and Doobys'. Isn't there a better way?

When in doubt, don't some might say. For me, I was happy to learn that the most publicized, was unqualified and did not win in our district. Yet, Mary Trew was no angel with her lawn signs. Her gang decided to take turf from St. Scholastic and so it goes.
Posted by lafew at 2/03/2010 07:19:00 AM No comments:

Life at the Lake stop. At 8

Just another fringe benefit. Living in Chicago is dense but intelligent. I am looking 4ward to a morning off work on Friday plus Free Shakesphere on Navy Pier tickets courtesy of CPS. Slainte!