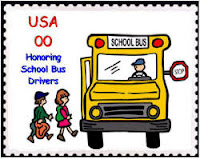 The morning ritual begins every morning at 5:45 a.m. regardless of blogging or surfing. The alarm, complete with a seranade of about ten computer generated clock sounds, blares through our ears. The sound sends the morning message that it is time to levitate. The brain disses the day and the body rises and moves towards the bathroom.

Upon return, daughter's blanket is pulled from her shrouded body which lays petrified on the futon couch tucked neatly in the corner of the room. The dawn's early light blows playfully through the whites of my eyeballs as I move toward the bedroom in search of pants. I return to wake my daughter and feed the puppy.

There is a synchronicity in our household at times. We know when the day starts and the bus leaves. Eventually, daughter gets her clothes on. Usually, the clothes must be reviewed, since she seems to think that she lives in California. The temperature still ranges from 40 to 50 degrees. Capri pants will not work unless I want to cancel the appointments on the next day, risk default judgments, and rest on malpractice claims as my premiums shift skyward. Life is now setting in.

With clothes on, we check the remains in the white box that is encased in the wall. The fridge will remain enshrined until we finally begin the perpetually delayed kitchen remodeling. Nothing appeals to my daughter except milk. The cerial is never worthy of more than one or two bowls. Boredom with the characters that christen the cardboard boxes seems to set in too early. We are the proud owners of stale flakes and oat rings.

After reacting over socks and soreness, we check out the Motorola cable box and are reassured that it is 6:31 a.m. We are dressed, our jackets are on, and we are ready to head south to Greenleaf. Wanda waits patiently in her school bus as we, among others, succeed in moving in the serpentine manner necessary to get from our home to Armstrong School.

The Disney Magnet School's bus pick up is at Armstrong School,among other stops. The deadline is 6:40 a.m. Wanda, our bus driver, has proven herself to be one of the most attentive and reliable people. She works her bus with patient and sympathetic precision. Wanda is rarely off the mark. She is a bus driver extraordinaire on a mission that she makes every day with painstaking dedication. It becomes clear that there is more to her life than hand to mouth.


Today, as I and another parent headed east down Greenleaf, two kids rushed north down Hamilton in disbelief. You could sense the sweat and air swirl around them in their relentless gallop. The anxiety was great. Wanda had pulled out and headed west down Greenleaf. The bus turned left on its path toward Jordan Community. The two distraught students began the trip back home. There, their mother was tending to their youngest sibling. The two kids were less than enthusiastic about notifying Mom. Today, would she have to drive the clogged artery from Rogers Park to 4140 N. Marine Drive? 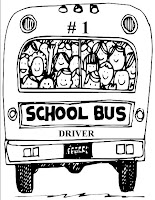 As her children walked north, an Atlantic Express Bus slowly came to a stop in the distance. It stood one block south, its red lights were glaring, while two childrens spirits began to rise. Wanda had stopped the bus, turned on the gear, and waited for two extremely excited school children. In less than twenty seconds, the bus door closed, the kids sat down, and Wanda proceeded.