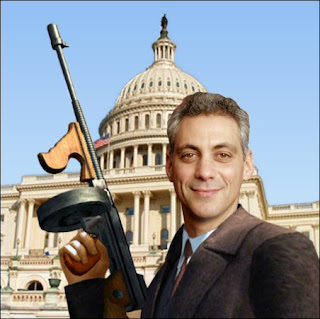 Traditionally, both the U.K. Labor Party and the U. S. Democrats have become the most palatable politicians to destroy unions.  Business will support these candidates and so-called liberals overlook these radical changes to the economic landscape.

I expect Emanuel's next jab at the Teacher's Union.  Besides, with Emanuel's kids safely tucked in The Latin School, does the Rahminator really care about Chicagoans with children in the public school system? Imagine if teachers at Latin School sat out for a day, perhaps a week, and demanded a vote for collective bargaining? Would they be locked out? Would enough pay attention?

Are many Latin School Teachers looking to network and treat their jobs as a transition? Well, I fear that we will experience all the mistakes that resulted in repetitive strikes in Daley Jr.'s early days.  Growing pains? Repeating history?

I hope that good teachers stay with CPS. I suspect scapegoating of competent teachers for the sake of the political status quo. Its gone on for years with uncommitted parents blaming CPS, not their own lack of commitment, or that of other parents.

The consequences of losing experienced and well trained teachers is not worth the gamble. Teachers struggle for the attention of those kids.  Some have young irresponsible parents and this cycle of ignorance cannot be broken without attention. It is a parent-teacher-student bond that leads to continuing and successful education.

Of course, the continued layoff of CPS social workers and psychologists mean that emotionally challenged or mentally ill children have fewer people and legitimate places to go for positive support.  Will these budget cuts result in more financial loss through the golden road to unlimited room and board via the correctional centers. Those who struggle for attention need options for legitimate success.

Kids need a place to thrive. The home television just does not cut it. Oh brave new politics! We feign ignorance for the sake of appeasing the masses into oblivion.

In four years, will the City will be a different place? Will it be a better place?  In four years,will Mayor Emanuel succeed?
Is Rahm that far from Bernard Epton in his political views? I have to wonder. Any thoughts? Perhaps, this is a work in progress with comments to come.  Is Rahm a short term Chicagoan with a long term suburban mentality?  Is this what Chicago needs for urban renewal?

The public schools are part of the puzzle. Yet, depending upon private enterprise which may have greater incentive to dummy test scores inflate grades creates concern? How much oversight exists in the private charter schools? Does the composition of charter schools threaten education?  Can charter school staff more easily dummy up test scores due to less oversight? Or are these simply exaggerated claims?
Posted by lafew at 2/22/2011 09:40:00 PM

Please spell the mayor's name correctly in the future.